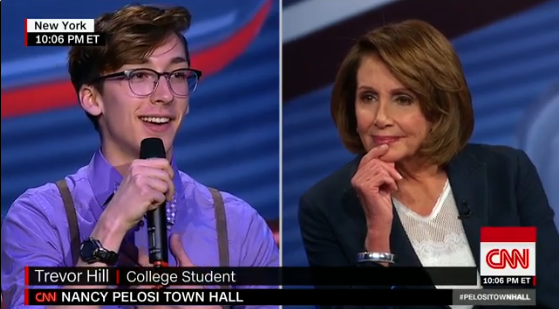 A Town Hall meeting on CNN with Nancy Pelosi went viral when Trevor Hill, a student at NYU ditched his pre-written question and instead asked Congresswoman Pelosi about the left-leaning tendencies of millennials:

A Harvard University poll last May showed that people between the ages of 18 and 29, not just Democrats and not just leftists, 51% of people between 18 and 29 no longer support the system of capitalism. That’s not me asking you to make a radical statement about capitalism. But I’m just telling you that my experience is that the younger generation is moving left on economic issues. And I’ve been so excited to see how Democrats have moved left on social issues. As a gay man I’ve been very proud to see you, and many Democratic leaders fighting for our rights. I wonder if you feel there’s any way you feel the Democrats could move any farther left to a more populist message, the way the alt-right has sort of captured this more populist strain on the right wing?

The moment Hill said a majority of millennials no longer support capitalism, Pelosi was visibly shaken, but she proceeded to defend capitalism with standard neo-liberal flair, ultimately declaring that “we’re capitalists, and that’s just the way it is” without really answering the question. some millennials caught up with Trevor to get his take on the exchange.

some millennials: First off I want to ask, how were you selected to ask her a question?

Trevor Hill: A friend of mine who aligns politically with me and who leads a lot of political organizations at NYU gets regular invitations from CNN to attend these sorts of events, and is also asked to forward the message to anyone she thinks would be interested. That happened to be me!

sm: You seemed very composed going off the planned course. Were you at all nervous at the reaction from either CNN reps or Pelosi herself?

TH: I was terrified, actually. The gentleman who went before me actually asked almost verbatim what I was planning on asking (What can Democrats do to help out/appeal to working families who felt as though they’d been left behind the “left” this election cycle). So I had to come up with that question in about a minute’s time. I may have looked composed, but I was about ready to sprint out of the room. I was definitely nervous once Jake Tapper started to express some exasperation when I said I’d changed my question. And after we were off the air, one of the CNN reps gave me quite the dirty look and sarcastically remarked, “nice question.” But, overall, I felt safe in that it was supposed to look like a genuine town hall meeting, and that I’d only been myself like any real person would. They couldn’t punish me for that.

sm: Your exchange became quite a hit on DSA/leftist Twitter. Were you expecting such a reaction from like-minded individuals on the internet and what was your response to Pelosi’s answer?

TH: I’ve been getting screenshots and updates from my friends and it’s blowing my mind. I never thought I’d get this much attention. I thought I’d get some “Oh my god I saw you on TV!s” from friends and family, but I never thought people would get so excited about my question. As far as her answer, I sort of feel bad for her. All she basically ended up saying was, “Capitalism only works on paper.” She admitted that the system is flawed and that we’re being screwed over, and then seemed to think that reverting to orthodox Adam Smith-era capitalism would fix the situation (as if orthodox capitalism hadn’t caused the messes we deal with itself). I appreciated the long-winded “let me explain to you what capitalism is, child” type answer, but I would’ve liked an answer to my question, which was focused on what areas Democrats could move left in order to appeal to younger, “left-er” generations.

sm: Were there any particular courses or readings that have directed your political leanings or has it been more of an organic response from witnessing the full effects of neo-liberal policies?

TH: It began with just my experience in a working-class family that was getting totally shafted (my parents declared bankruptcy during the most prosperous period of the Obama “recovery”) and my decision that nobody should have to wonder whether or not their parents will be able to put bread on the table, and no family should have to decide between food and electricity (like mine did during our toughest moments). I read the [Communist] Manifesto and followed a lot of left-leaning publications like The Intercept and Jacobin, and during my time at NYU I’ve taken a lot of courses on the effects of capitalism (most notably “Empire and Decolonization,” a course on the role of capitalism before, during, and “after” colonialism) and those have honed my understanding of deeper socialist theory. But overall, I’m not a very well-versed Marxist – I have a better understanding than the average person, but I don’t have a bookshelf full of authors I can recommend for becoming more informed about socialist theory. Although my favorite Marxist is Samir Amin, and I love his theory on “De-Linking.”

sm: Your question at the town hall was if she thought the Democrats would move left on economic issues as they have with social issues. Do you have faith in the Democratic Party to do just that or do you think some outside force will be the agent for change?

TH: I have zero faith in the Democratic Party. I switched my registration from Independent to Democrat to vote in the primary and left as soon as the primary was over. I fully expected her to avoid any mention of moving left on economic issues and I don’t expect Democrats to so in the future. I believe that, ultimately, revolution will come. What that will look like, I can’t say, but I’m certain that the drastic changes necessary to uproot the system will not come from the system itself. I have a lot of faith in our generation. Our tech savviness and our revolutionary spirit are helpful in keeping us more immune to propaganda and Washington BS than any generation before us. I’m also nervous about the power of capitalists, though, and I think our generation needs to be especially wary of their designs since it’s us who are most likely to wrench power away from them.