With 5:40 to play in the second quarter vs. the Magic on the 30th of January, Ricky Rubio took a pass out of the high-post from Karl-Anthony Towns. Elfrid Payton was doubling Towns, helping off Rubio as he had been all game. Frank Vogel’s game plan clearly included forcing Rubio to beat them – they went under screens all night, making it crystal clear that they didn’t respect his shooting ability. To their credit, he hasn’t shown that ability in his career, and coming into the game he was shooting an abysmal 23.9% from deep, but he caught the pass from Towns and didn’t hesitate as he knocked down his first triple of the game.

It felt like we were in the twilight zone as Ricky continued hoisting deep shots (including a 4th quarter heat check!) and finished the game with six made threes (a career high), while the opposing point guard and fellow “non-shooter” Elfrid Payton added two as well. Including that game, he made 14 of his next 30 3-point attempts, good for 46%, and increased his 3-point percentage for the season up to 29.3%, or roughly in line with his career mark. The question the Timberwolves need to answer is if this means anything for his future, or if it was a fluky stretch and his shooting will return to its previous, putrid form. The cynics will suggest the latter, but there has been a precedent for vast improvement in shooting as a player ages, Jason Kidd being the most prominent example.

Ricky showed off in front of Kidd Saturday night in the Wolves’ loss to the Bucks, scoring a season-high 22 points on 9-of-14 shooting, including 2-for-3 from deep. Kidd has shown interest in acquiring Rubio recently but was unwilling to part with sharp-shooter Khris Middleton, whom the Wolves reportedly were interested in. Despite the rumblings that began before he ever set foot in Minneapolis, Rubio is still the point guard for the Timberwolves; any marked shifts in attitude or skill-set should be a welcome sight for Wolves fans, even if his ultimate fate will be the “bridge guard” until the young core is truly ready to compete for a championship.

Rubio’s increased aggressiveness seems to have directly correlated with a demonstrative response from Karl-Anthony Towns in early January when he threw his hands up in frustration and turned away from a play after Ricky passed up a wide-open layup in favor of kicking out to a shooter in the corner. Since that moment, Rubio has made a noticeable effort to look for his own shot more frequently than he ever really has, including pulling up for a shot in transition when he had a teammate that could’ve been assisted (h/t Britt Robson). The coaching staff has tasked him with becoming more “selfish,” and it has paid dividends for the Wolves, who are on a relative hot streak, having won 6 of their last 9 games in their chase for the 8th seed in the Western Conference. Sam Mitchell described Rubio’s impact around this time last season:

Ricky played — he’s amazing because every single play, offense and defense, he competes as hard as he can. And that is something that is rare in this league. Not to take anything away from the other guys — they all play hard — but the way Ricky gives 100 percent on every play, he’s just a, he’s a unique player.

He outplayed Chris Paul, Stephen Curry, and…Matthew Dellavedova in consecutive games by coming out strong in the first quarter and dictating how the game is going to be played. His aggressiveness has even extended beyond merely shooting more; he has stood up for himself and his teammates, getting into little scuffles with Patrick Beverley and Blake Griffin.

Ricky’s been setting the tone early in games, taking a midrange pull-up within the first few minutes of almost every game recently to let the opposition know that he’s not afraid to shoot, despite his reputation. That mentality has extended to him taking the defender off the dribble and trying to get to the rim to score, rather than just dribbling the ball until he finds someone wide open. He made Chris Paul look silly with a nasty euro-step and easily blew past Dellavedova multiple times. Rubio has been finding the open man as often as ever, and the flashy passes that electrified Target Center in his rookie year have become a thing again, though Wolves fans might be a little numb to them now. One man who definitely appreciates Ricky’s abilities as a passing savant is Shabazz Muhammad, who is shooting 62.5% on passes from Rubio, often on long outlets in transition that lead to emphatic dunks. Ricky spoke to Britt Robson about his aggressive starts early last season:

But of course in the first quarter I am more focused and I have fresh legs. Usually players like to get easy in the game and I realized as a point guard for a young team as we were, coming off a bad start, and I wanted to lead by example, like I said, and so to be aggressive from the beginning trying to do my own thing and get some shots up in the beginning.

His mid-range game has improved dramatically and he’s shooting a career-high from 10 feet out extended to the 3-point line, but his finishing around the rim and catch-and-shoot ability leave some questions about whether he can ever become a ‘good shooter.’ His True Shooting Percentage for the year is 53.6, which puts him at about league average, but that is mostly hinged on his ability to get to the free throw line at a high rate. The good news is that he’s the best free-throw shooter on the Timberwolves roster, and he has currently made 43-straight technical free throws (s/o Dave Benz). His shot chart has normally been historically ugly, and the cluster around the rim definitely needs to have some more red, or at least not be solid blue, but he’s become a very reliable mid-range jump shooter coming off the high pick-and-roll, and there have been fewer audible gasps in Target Center of late whenever he decides to shoot. 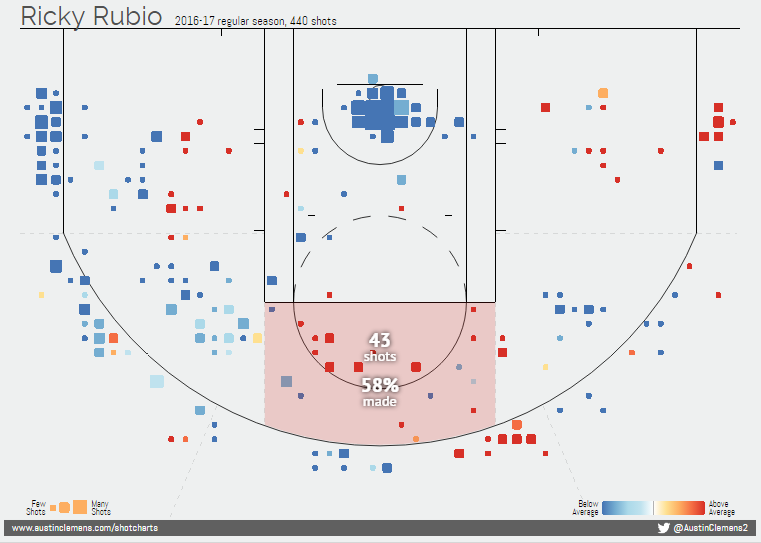 Living at the free-throw line.

His free-throw percentage (86.6%) is a reason to believe that his shot is not all the way broken, and there’s at least some chance that he could complete a Kidd-like transformation. Through his first six seasons, Kidd’s 3-point percentage was only marginally higher, and Rubio’s TS% is actually slightly higher. It was later in Kidd’s career that he was able to become a legitimate 3-point threat as his physical tools declined and the reality of the necessity to be a shooting threat sunk in, and he currently sits at 8th all-time in NBA history for 3-pointers made. Another random comparison between the two; there have only been 9 seasons in NBA history where a player had a VORP (Value Over Replacement Player) over 2.0 and was shooting less than 38% from the field. Ricky Rubio’s 15-16 campaign appears on the list alongside two seasons from the latter half of Jason Kidd’s career.

This is not to suggest that Ricky Rubio is going to be a Hall-of-Famer and finish his career among the all-time leaders in 3-point shooting, but it’s not unreasonable to suggest that a 26-year-old still has time to grow as a player, although given all the discussion around Andrew Wiggins, maybe it’s a lot to ask. Kidd’s not the only prominent example either; Kyle Lowry was only an only marginally better shooter than Kidd and Rubio through his first six years in the league and now he’s one of the premier shooters in the NBA. It will take a lot of work to turn Rubio into a competent catch-and-shoot player – and his release will need to be a lot quicker -, but it’s worth holding out hope that he can become at least average because he’s great at nearly everything else and is truly a joy to watch.